If you are looking to get more involved in 2022 we'd like to ask you to fill out our get involved form below and tell us where you'd like to serve. 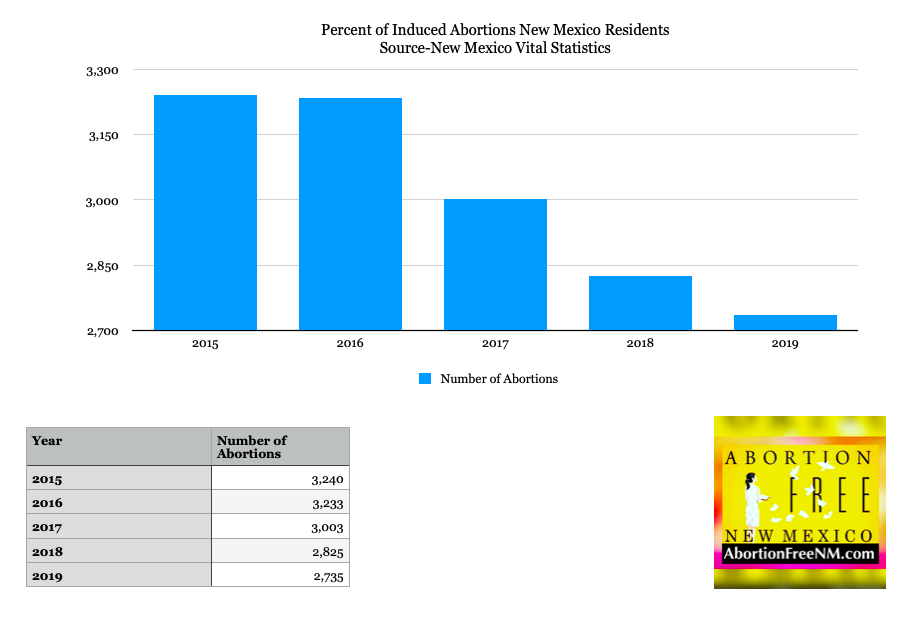 Albuquerque is home to three surgical abortion facilities, Planned Parenthood, Southwestern Women's Options and the University of New Mexico (UNM). Over the past decade we have worked to expose the fact that Southwestern Women's Options is performing late-term abortions through all nine months of pregnancy. In fact, New Mexico has the national notorious reputation as, "The Late-Term Abortion Capital of the Country," a designation we coined. As a result, there is a faithful sidewalk advocacy presence there, and thankfully CareNet brings their mobile ultrasound unit there weekly to help reach abortion minded women. Planned Parenthood in known as the nation's largest abortion provider and is home to 40 Days For Life twice a year. In addition, the Catholic pro-life organization, Women's Pregnancy Options (formerly known as Project Defending Life) is located next door and has a faithful sidewalk advocacy presence throughout the rest of the year.

However, the University of New Mexico (UNM) has been flying under the radar with a minimal pro-life advocacy presence (only our Faith To Action Friday presence once a month). Unbeknownst to many, the University of New Mexico runs its own free standing abortion facility, UNM Center For Reproductive Health, that performs late-term abortions up to 24 weeks of pregnancy, that's 6 months! As a tax funded institution, UNM has an endless supply of our tax dollars to fund their radical abortion agenda. In fact, according to our research, UNM is the heart of the abortion cartel here in New Mexico and in a shocking admission, openly celebrates abortion! ​

As effective as our efforts have been over the past decade to expose late-term abortion in Albuquerque, in 2022 we are redoubling our efforts to expose New Mexico's flagship institution and leading hospital's radical abortion agenda. University of New Mexico leadership needs to hear a louder voice in opposition to this agenda and the community at large deserves to know the truth about how their tax dollars are being spent to prop up the abortion industry.

We are committed to continue our work to make New Mexico Abortion Free, as we increase our efforts in Albuquerque, by establishing a stronger pro-life presence in our city.

This year Abortion Free New Mexico wants to organize a constant prayerful presence starting with the UNM Center for Reproductive Health abortion facility for every hour that they are open. This is one of the darkest places in our city, but it can become a beacon of hope as Christians rise up to be a voice for the voiceless and their mothers. Will you partner with us in 2022 to make this a reality?" stated Tara Shaver of Abortion Free New Mexico. 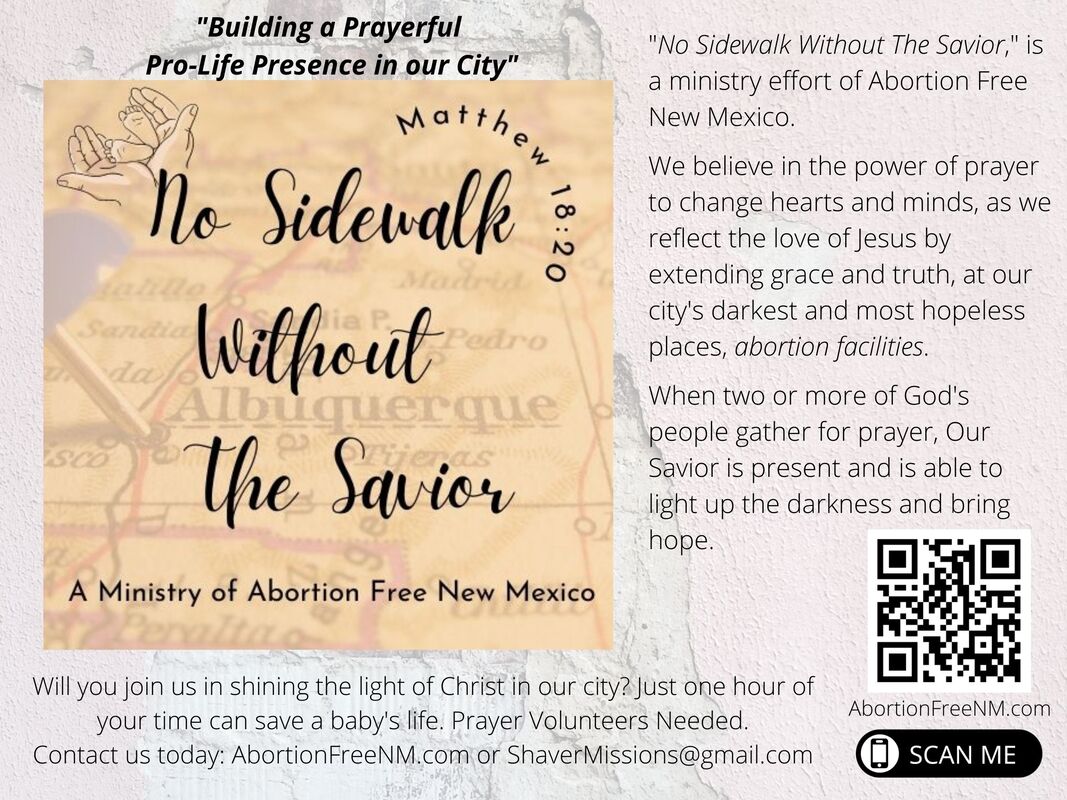 "No Sidewalk Without the Savior," is a new ministry effort of Abortion Free New Mexico. We believe in the power of prayer to change hearts and minds, as we reflect the love of Jesus by extending grace and truth, at our city's darkest and most hopeless places, abortion facilities. When two or more of God's people gather for prayer, Our Savior is present and is able to light up the darkness and bring hope. (Matthew 18:20) 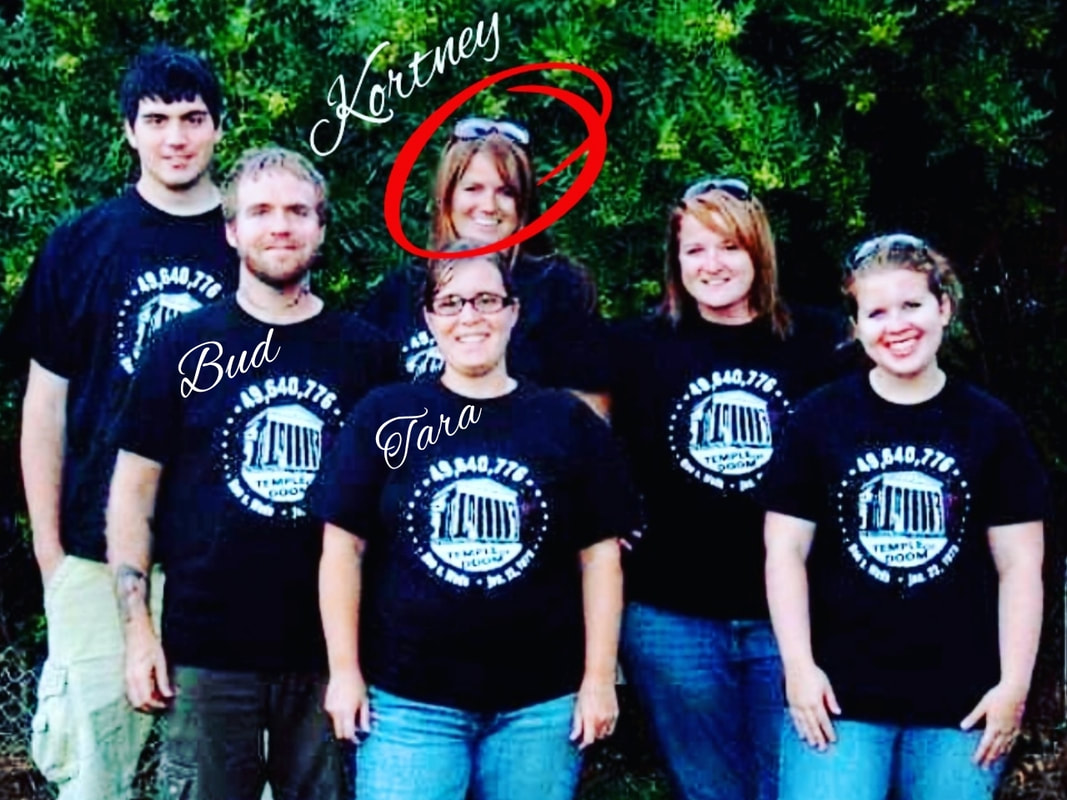 The namesake of this initiative is in honor of our late friend and fellow pro-life abolitionist, Kortney Blythe Gordon. Kortney was the leader of our team while we served with the Survivors of the Abortion Holocaust, where Tara and I began our pro-life journey, and her passion for pro-life activism was contagious. Kortney loved the Lord, His children and couldn't wait to become a mom herself. Her dream came true when she married and conceived her daughter, Sophy (named in honor of Sophie Scholl). Tragically, she and Sophy went to be with the Lord after being hit by a drunk driver, while pregnant. Kortney told us that if she had her own sidewalk ministry, "No Sidewalk Without the Savior" is what she would call it. This has stuck with us all of these years and we are proud to honor her memory in this very special way.

"No Sidewalk Without the Savior" is being organized as a month to month prayer initiative where our goal is to have two people praying every hour that the UNM Center for Reproductive Health is open. Abortion Free New Mexico is utilizing day coordinators to recruit prayer volunteers, and there is still a great need for coordinators as the goal is to launch this prayerful presence on April 1, 2022.​

Fill out our form below and join our team!